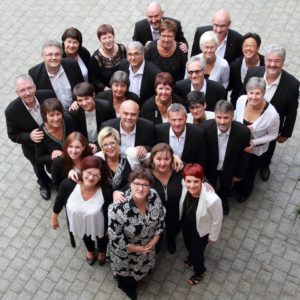 Alba Nova, a mixed vocal ensemble from the Malmedy region, was founded in 2003 and is currently led by Els Crommen, singing teacher at the Malmedy Music Academy. The choir is a member of the « Tournées Art et Vie » of the French Community of Belgium and is constantly trying to innovate by adding many different styles of music to its repertoire.

The vocal ensemble Alba Nova consists of around 30 amateur choir members with musical and vocal training. The deliberately limited number of members of the group makes it easier for the vocal ensemble to strive for a homogeneous timbre that should ideally be adaptable to any musical environment. Alba Nova has set itself the goal of presenting a wide range of different vocal works to the public.

Each year Alba Nova usually sets up two or three music projects and takes part in two singing seminars. In addition, the vocal ensemble gives between 10 and 12 concerts annually.

After completing its project on Francis Poulenc in 2004, the vocal ensemble went first on a « Journey through the ages » from Monteverdi to the present day, and finally continued its international orientation with « Christmas here and abroad ». In addition, Alba Nova successfully completed an APSAM placement test in autumn 2004 and was classified in the « Excellence » category at amateur level.

In 2005 the project « Melodies from here and abroad » was a great success with the public, for example at concerts in the Malmedy region, but also in Namur, Brussels and the Royal Chapel of Fischbach in the Grand Duchy of Luxembourg.

In 2006 Alba Nova worked on a 100% South American repertoire by tackling the « Misa Criolla » by Ariel Ramirez and various arrangements by Astor Piazzolla.

In July 2006, Alba Nova went on a one-week concert tour to Bamberg, Bayreuth and Prague, with South American and English-language pieces on the programme. In the autumn of the same year, Els Crommen proposed to approach the repertoire of German Romantic Music, and in September Alba Nova invited the Dutch chamber choir « Mi Canto » from the ‘s-Hertogenbosch region. For its traditional Christmas concert, Alba Nova invited « Signum », a choir from Kortessem in Limburg, Belgium.

After the success of the Latin American programme, Alba Nova was invited to both Grevenmacher (Grand Duchy of Luxembourg) and Stavelot. The « Quatuor Lamina » and the tenor Alain Gabriel participated in these two concerts in April 2007, and their talent further enhanced the performances. In September 2007, at the invitation of « Mi Canto », a concert at Heeswijk Abbey in Holland followed, before the year ended on a festive note with the traditional Christmas concerts. The very talented youth choir « Da Capo », also directed by Els Crommen, participated in the Christmas concert in Malmedy as a special guest.

In April 2008, Alba Nova set itself the goal of promoting talented Belgian composers, also teaming up with the ensembles « Carmina Viva » from St. Vith and « Musa Horti » from Leuven and thereby symbolically bringing together the three language communities of the country. The three concerts (one in each community) introduced an enthusiastic audience to a wide range of Belgian music.

In 2009, Alba Nova was very lucky to be able to work with the excellent « Quatuor Lamina » on a concert programme with songs from Musicals, and to have the opportunity to perform this concert seven times. Alba Nova also had the great honour of opening the classical music festival in Stavelot in August 2009 with the « Messe des Artistes » (artists’ Mass) in the local Saint Sébastien church.

2010 was the year of the operetta. In cooperation with the choir « Aveland » from Hoeselt, a concert entitled « L’opérette vagabonde » was staged first in Malmedy and then in Tongeren. Alba Nova also had the pleasure of opening the Stavelot Festival with the « Messe des Artistes » for a second time (this time with a Mass by Raymond Micha, a composer from Stavelot).

Alba Nova celebrated its 10th anniversary in 2013, and the vocal ensemble has also been invited to appearances in Cologne Cathedral (2009 and 2014) and in the Cathedral of St. Michael and St. Gudula in Brussels (2016).

In 2018 – as part of the commemorations of the end of the First World War 100 years ago – the vocal ensemble joined the ensembles « Carmina Viva », « Zephyros » and « Kaleidoskop », under the overall musical direction of Rainer Hilger, in a special performance of the very moving « The Armed » Man: A Mass for Peace « by Karl Jenkins. 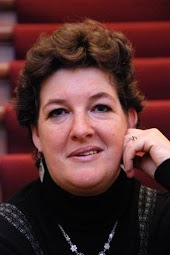 Els Crommen was born in Tongeren (Belgium) and grew up in the nearby village of Hoeselt. After her secondary education she went to the Royal Music Conservatory in Liège and attended the classes of Edith Cuypers, Raymonde Serverius, Greta de Reyghere and José Van Dam. At the Conservatory she obtained diplomas in opera, song, solfège and chamber music.

After that she attended masterclasses of Noel Barker, Marlène Malas and Mikael Eliasen. In addition to that she participated in several courses at the Fondation Royaumont (France) and the European Centre for Opera and Vocal Arts (ECOV).

Els Crommen feels comfortable in a large variety of musical styles and she regularly collaborates with different ensembles:

As a soloist she is regularly accompanied by some renowned conductors such as:

In the course of her career she also participated in various recordings for the VRT and the RTBF (Belgian broadcasting stations) as well as in a multitude of CD recordings.

In 2000 she participated in the Queen Elisabeth Competition for voice, and in the following year she was a laureate in the Erna Spoorenberg competition in the Netherlands.

During 10 years Els Crommen was a permanent member of the VRK (the Flemish Radio Choir) conducted by Vic Nees and Johan Duyck, and in recent years by Hervé Niquet. She still performs with this choir on regular occasions, either as a replacement or a support member. Next to her career as a soloist, she is also active in musical education as a vocal teacher at the Music Academy in Malmedy.

Els Crommen is the musical conductor of the vocal ensemble Alba Nova in Malmedy. Recently she also founded the barbershop quartet « Les Caramel’s », which puts close harmony singing at the centre of its repertoire. Its members are: Els Crommen (soprano), Hélène Thonnard (soprano), Martine Médol (mezzo-soprano) and Carine Freches (alto).

Els Crommen is regularly invited to the following festivals: